I choose Petite France and the Garden of Morning Calm because I had seen both places mentioned on variety shows.  I found Goh Travel Agency through internet research and discovered they had a tour during the Seollal (Korean New Year) holiday.  I choose this tour for two reasons, first because I could pay online and second because the tour bus picked up passengers at Hongik subway station exit, the same exit I used to go to the hairdresser.

Since I would be outside for most of the day I decided I would layer my clothes.  Luckily the weather report forecasted a clear day without any rain or snow.   After finding my way from the subway I found the small tour bus.  As we waited for more passengers the tour guide asked if anyone needed to use the restroom.  I and the two other women on the bus declined.  I decided I would wait because I wasn’t sure where the bathroom was located and I didn’t want to get lost.

One of the ladies introduced herself and her friend.  I found a quick bond with one of the women seeing as how both of us were from Los Angeles, California.  I was excited to be able to speak English but also because of our common goal; the freeway traffic on the 405.  The next three bus stops people from different countries, ages and religions came on board.  Our commonality of being foreigners living in South Korea bonded us for the day.

Traveling to Petite France I took a picture of a frozen lake as we drove up the windy mountain road.  I could only imagine what a busy tourist location it was during the summer.  For now, the bus heater was turned on and I could understand other tourists conversation.  You never think you will miss familiar sounds until the option is no longer available.

We finally reached our destination and slowly made our way from the bus to the entrance of Petite France.  As we waited for the tour guide to purchase our tickets I talked to the woman who was from Los Angeles.  We also discovered that both of us loved K-Dramas.  We talked about the dramas we liked and I recommended Coffee Prince and Boys Over Flowers, my two favorites.  Of course, they were the first two K-Dramas I had watched, so I consider them to be classics.

An African-American woman and her teenage daughter also joined in on the conversation.  I found out they were from Hawaii and she was teaching English at a local hagwon.  We grabbed our Petite France tour map as we went inside.  The lady and her daughter mentioned how they were really hungry.

There was the initial awkwardness of having just met someone but also knowing that we would see each other all day.  Do we wait for each other and form a stronger bond or do we go our separate ways?  If we choose the latter would it be awkward for the rest of the day as we walked past each other?  We stopped for a restroom break and then decided to go find something to eat.

I settled on hot chocolate and skewered chicken.  The perfect combo for the cold weather.  We found seating at the top of a lighthouse and asked each other the standard questions.  Where do you live and work?  What made you want to come to South Korea and how long do you planning on staying?  I was happy to sit and listen to them talk, they were talking in English and I was a part of the conversation.

The conversation quickly turned to politics and the various opinions on the new administration.  Both South Korea and the United States were going through Presidential turnover.  I don’t follow politics closely if I am telling the truth, I usually ask my sister the hot topic issues and vote accordingly.

After finishing our drinks and snacks, we walked around the French village and took photos.

Next, we went to the marionette dolls house.  It was filled with dozens of marionette dolls, which was a little scary if you have ever watched the movie Chucky or IT.  Since I am not of fan of horror movies I went into the french houses that were decorated with old oil paintings. Grandfathered clocks and antique furniture. 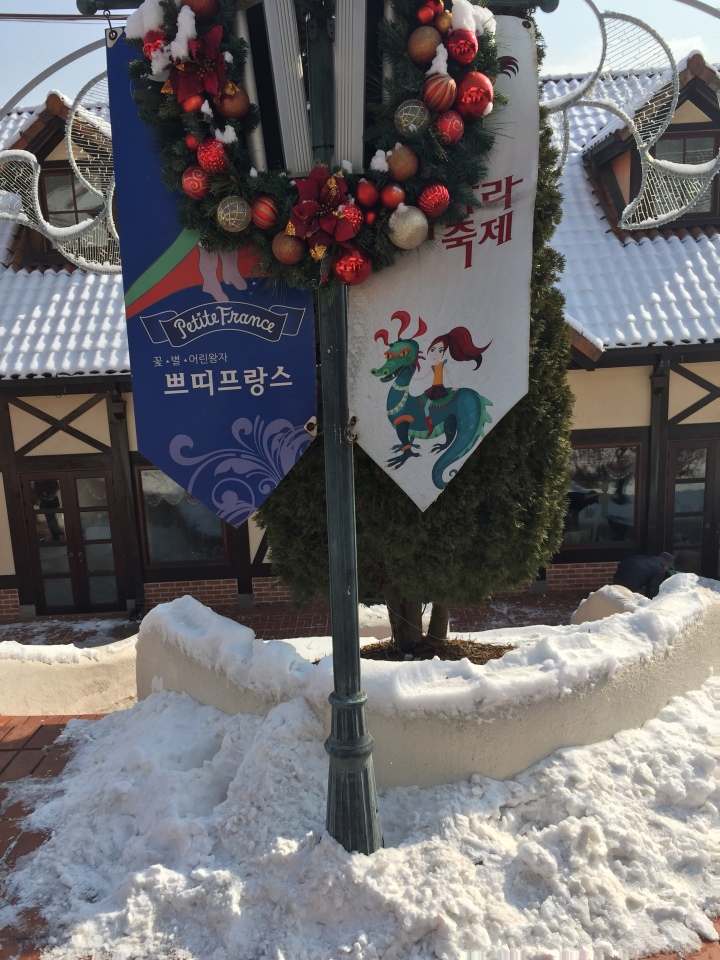 I somehow lost the two women I initially met and ended up touring the rest of the French village with the mother/daughter duo.  I wanted to continue our talk about Los Angeles traffic, chipotle burritos and In/Out.  We left Petite France and went to a convenience store across the street and bought snacks before getting back on the tour bus.

After driving for about an hour, we arrived at the Garden of Morning Calm Lighting Festival.  It was a flower garden that was decorated with beautiful colored lights for the Winter.  Since we arrived before the sunset we had the excuse to shop at the Herb Gift shop located at the entrance of the garden.

As we walked around the gift shop we were comfortable enough to exchange Kakao I.D. and send hello text messages to each other.  I walked around the shop smelling beautiful floral flower scents and lotions that made me wish for Spring.

After leaving the gift shop we made our way over to a traditional Korean restaurant.  I ordered what I thought was bulgogi (seasoned beef), rice, soup and a vegetable.  *Tip – Read every ingredient listed on a Korean menu.  Because the sentence structure is different in Hangul than English, you could incorrectly read the menu*  If I had known this at the time, I would have realized what I ordered was actually tofu bulgogi.  However, even with the mixup, I enjoyed my dinner of beef soup, white rice, and vegetable banchan.

The lighting festival began and I filled my iPhone with the pictures of the beautiful scenes.

Walking around the garden I was immersed in the lights and magic of the evening.

I enjoyed my experience, I met new friends and I had gotten out of the dorm room.

In the end, my Korean New Year turned out to be a perfect day spent eating good food and enjoying the company of new friends.

If you want to read more about my travels in Seoul, South Korea check out my experience: